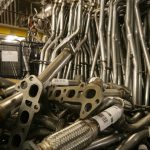 A Guide to EU Emissions Standards

Mark Blinston, Commercial Director for BM Catalysts, explains the ins and outs of Euro emissions standards, so that factors can keep up with an area of the industry that is in a constant state of ﬂux. With the global warming crisis continually growing, the current debate surrounding EU emissions is gaining a lot of momentum across many domestic and international media platforms. The focus has centred on educating the public on the need for reduced emissions, as well as calling for companies and individuals to become more conscientious and take action, to reduce the impact emissions are having on air quality in the UK, and around the world. However, the emissions industry is fighting the continual challenges of limited knowledge surrounding EU emissions and the importance of purchasing the correct aftermarket parts for a car, for the right price. A challenge BM Catalyst’s Commercial Director, Mark Blinston, is trying to combat in the aftermarket.

He commented, “The cataloguing of aftermarket parts is complex and challenging, and many consumers will not be aware of the EU emissions level their vehicle must adhere to. It is therefore down to the garage and parts distributor to ensure that the part being sourced is approved for sale to the correct Euro level of the vehicle in question.”

This, however, is something that has recently been identified as a problem. In the aftermarket, parts can be physically the same, catalogued with the same start and close dates yet be very different in terms of the internals, and what they are legally approved for sale to fit. With this in mind, Mark explains what factors need to know, what they should be aware of, and what they can do to help bring about change to
minimise the impact of EU emissions.

What you should know about emissions standards

When it comes to measuring EU emissions, the current standardised test used in theEU is the New European Driving Cycle (NEDC). The NEDC is designed to assess emissions levels of car engines and fuel economy for passenger cars.

The first part of this cycle stimulates urban driving, whilst the second part is designed to replicate motorway driving, which is supposed to represent a car’s typical emissions output, in Europe. However, the NEDC was last updated in 1997, and with technology and emissions continually developing over the last 20 years, the NEDC has become outdated, leading to repeated criticism that the driving cycle delivers unachievable economy figures. This highlights the need for a new standardised test, more
applicable to modern day driving.

In line with this, the NEDC is gradually being replaced by the World Light Test Procedure (WLTP), which is expected to be fully implemented by September 2019. The transition from the NEDC to the WLTP is believed to better replicate driving behaviour and unlike the rather basic NEDC, the WLTP tests are expected to provide a greater range of driving situations (urban, suburban, main road and motorway), more realistic temperatures, more dynamic and representative accelerations and decelerations, stricter car setup and measurement conditions, and will provide best and worst case values on consumer information.

Following the introduction of Euro 1, a series of Euro emission standards have been passed, leading to the current Euro 6, introduced in September 2014.

The Euro levels set emissions standards for passenger cars, and were introduced to improve the overall air quality in Europe by reducing the levels of harmful exhaust emissions, chiefly: nitrogen oxides (NOx), carbon monoxide (CO), hydrocarbons (HC), and particulate matter (PM). EU emissions tests are becoming more stringent over time and coupled with the gradual lowering of non-dispersible chemicals that are permissible, it becomes considerably harder to achieve a pass when testing newer parts and newer vehicles.

So, when it comes to combating the current emissions crisis at hand, what can we do?

Mark said, “Certainly a large amount of responsibility lies with factor staff, but customers who actively push factors to use the correct part will be playing a role in combating emissions. With this in mind, it is important that people know what can be done to ensure European emissions standards are met. Firstly, the right part needs to be fitted to the right vehicle, according to the emissions standard of the vehicle in question. Vehicles and replacement emissions control devices must meet the specific standard for exhausts emissions before they can be offered for sale in the European Union.

“Secondly, type approval must be achieved. This means that emissions and noise levels must be within calculated limits as prescribed by legislation. Type approval requires third party approval testing, certification and production conformity assessment by an independent body such as TUV in Germany or Idiada in Spain.”

Looking forward, very positive changes to technology and legislation are on the horizon. For example, in 2017 the introduction of petrol particulate filters to some new petrol vehicles occurred and is expected to be brought to the aftermarket within three years. Similarly, in 2018 expected changes to the DPF test, as part of an MOT, will be made part of the Roadworthiness directive.

Replacement selective catalyst reduction (SCR) will begin to be seen in 2019, and Euro 6 vehicles are showing trends of increased numbers of catalysts on vehicles, in comparison to the same models produced to lower Euro levels. Finally, it is expected that further tightening of emissions standards at MOT will follow over the coming years.

Looking ahead, Mark commented, “Continuous improvements of parts to lower emissions are ongoing, and initiatives are being implemented to help combat emissions. BM Catalysts is eager to continue playing a key role in this.

“Although new regulations and technological developments are being implemented in the forthcoming years, they won’t eradicate global warming and the effects of emissions, but they are steps in the right direction.”

2015 statistics illustrate that EU emissions have fallen by 22% since 1990, representing 1,265 million tonnes less CO2 and equivalents being produced, putting the EU on track to surpass its 2020 target.