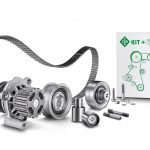 Pumps Past and Present

The value of water pumps has increased sharply over the years, but why is that? Martyn Holt, Product Development Manager at Schaeffler, evaluates the evolution of the water pump, its add-ons and how motor factors can take advantage. INA, part of the Schaeffler Group, is a manufacturer of OE water pump bearings, shafts and impellers. It understands the importance of sealing technologies, and one of the key advances over the years has been the introduction of silicon carbide.

Geological differences have also had an effect, according to Martyn: “Where water is hard in one area, it will be soft in another. Schaeffler has always encouraged technicians, in line with the vehicle manufacturers, that while the correct grade of coolant is important, it’s vital that they use deionised/demineralised water to avoid any build-up in limescale.”

Schaeffler has adapted to the demand to reduce CO2 emissions; it has moved away from the standard conventional water pump and has developed revolutionary water pump systems that can manage the thermal conditions within the vehicle. Martyn said, “Schaeffler introduced its first Thermal Management Module (TMM), for the 2L TFSI Volkswagen/Audi engine. It controls and regulates temperature, but does so much more than that. Rather than just managing the temperature of the engine, it also controls components, like the turbo intercooler and gearbox oils.

“In hybrid vehicles, batteries are encapsulated in a water jacket to keep them cool, while there are significant effects for vehicles fitted with start-stop technology as well.

“When a traditional engine stops, the belt-driven water pump stops with the engine. However, if a motorist is driving a vehicle with a start-stop system in the city, the engine could overheat very quickly. ‘Run-on’ pumps allow for the coolant to be continuously pumped around the engine to prevent that from happening.” The future of water pump design is significantly different to the traditional, beltdriven mechanical water pump, and INA, as an OE manufacturer, is already ahead of the curve.

Years ago, a water pump was an inexpensive commodity. The majority of technicians’ perception was that they wanted “a good quality timing belt kit but not necessarily a high-quality water pump”, according to Martyn.

However, that perception is now improving: “In monetary terms, if you look at the invoice value of a traditional water pump a few years ago, it would be worth between £30 and £40. These new, intelligent water pump solutions, like the one originally fitted by BMW, can cost in excess of £300.

“Therefore, the invoice value for a motor factor is obviously increasing and is an excellent add-on.”

More importantly, though, motor factors must consider upselling. Like oils years ago, coolants are now vehicle-specific, and there are many variants of coolants available. Motor factors can take advantage of the fact that the correct grade of coolant is needed as well.

0 0 0 0
Previous : VLS Celebrates A Successful Automechanika
Next : A Grand Unveiling