Primalec’s Managing Director, Richard Doran, highlights some compatibility issues between modern A/C systems and certain lubricants, and suggests the best oils to be used with the electric compressors found in hybrid and electric vehicles.

Since 2017, nearly all new cars have been fitted with R1234yf, a hydrofluoroolefin (HFO), as the A/C refrigerant. The few exceptions use high pressure CO2. HFO-1234yf’s low environment friendly Global Warming Potential (the IPCC now believes it is less than 1, so lower than CO2) emanates from its inherent instability, which enables it to break down quickly in the atmosphere if it leaks.

Inside a correctly charged, leak-free A/C system, combined with the correctly formulated compressor lubricant, the R1234yf is stable and effective with very similar thermal characteristics to its more stable predecessor, R134a. However, when incompatible materials find their way into the A/C, issues can arise.

Both R134a and R1234yf use compressor oils based on polyalkylene glycol chemistry (PAGs). However, the standard PAGs that have been used successfully in R134a are not miscible with R1234yf and should not be used.

Nearly all vehicle manufacturers now specify the use of HFO compatible PAGs, such as Snow Leopard, the brand of HFOPAGs formulated by Primalec. Only carefully selected base stocks are used to produce pure double end-capped polyalkylene glycol oils with a capping efficiency above 90%. 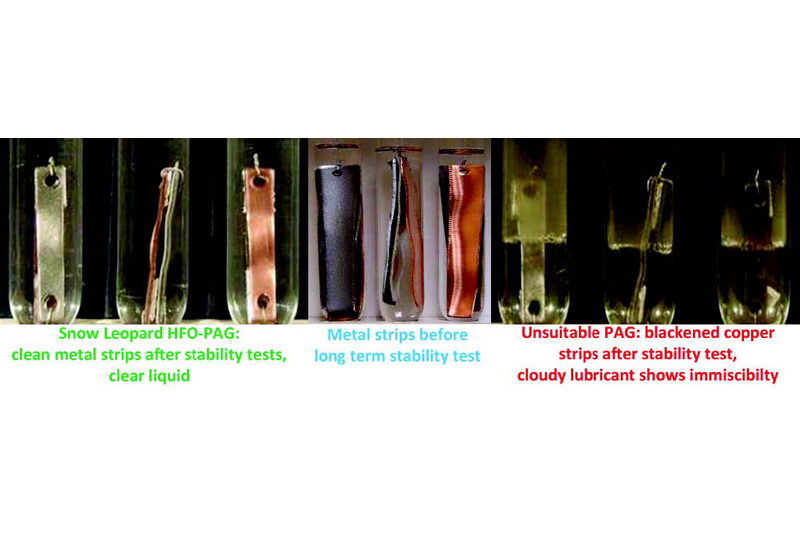 Snow Leopard HFO-PAGs are also unique by virtue of their optimal additive pack of less than 3%, which means >97% of the lubricant is pure oil. They also have a very low moisture content, which makes them ideal for use with electric compressors found in hybrid, PHEV, and EVs, plus they give great results in older R134a vehicles too. That means that genuine HFO-PAGs can be used in all systems: R134a, R1234yf, hybrid, EV and PHEV – unless the VM specifies otherwise.

The issue with electric compressors is that the oil may contact live electrical parts, so the oil must be as non-conductive as possible. Water is the enemy here because of its conductivity. Traditional PAGs have higher moisture content than POEs, so the automotive industry was traditionally more comfortable with POE based oils for electric compressors. That is why most R134a hybrid and electric cars were fitted with polyol ester lubricated compressors.

Is there one lubricant we can use for all types?

Manufacturers do specify particular lubricants for their A/C compressors, so it is always wise to stick with the vehicle manufacturers’ recommendations. For maximum peace of mind though, I would suggest using MRL85 if the compressor is known to contain a POE oil from first fill.

The majority of R1234yf vehicles with both belt driven and electric compressors now come with either HFO-PAG46 or HFOPAG100 at original fill. Therefore, Snow Leopard HFO-PAG is one lubricant type for all compressors.

Technicians will also be fully aware that working on EVs needs additional training and equipment because of the high voltages encountered. These include insulated hand tools, a high voltage Multi- Meter (DVOM), an insulation tester, an EV battery charging point and/or hybrid battery charger, non-conductive work benches, PPE – all rated for 1,000V – and signage.