Brexit has become a complicated issue for many British companies. Morris Lubricants and the Morgan Motor Company are joining forces to weather the change, and beneﬁt from each other’s expertise.

Established 150 years ago, Morris Lubricants has been led by the same family for five generations, making it a true British manufacturer of oils and lubricants. The business grew to supply oils after the First World War, when JK Morris, the son of founder James Kent Morris, built on his experience of selling for the AngloAmerican Oil Company, to purchase surplus lubricant under tender from the Disposal Board set up after the war. This enabled the business to achieve its status as a supplier and developer of oils for the increasingly popular internal combustion engine.

The Morgan Motor Company is slightly younger, at 110 years old. After setting up a car sales and servicing business in 1905, H.F.S Morgan started dreaming of a vehicle of his own design, which led to the creation of the Morgan 3-Wheeler in 1909, a simple design that took a motorcycle engine and integrated it into a lightweight chassis and body. Although not originally intended as a commercial venture, the reaction to Morgan’s machine encouraged him to consider putting the car into production.

A sense of tradition

History and tradition are key factors in both businesses. Morris Lubricants established a base in Shrewsbury in 1912, and as its oil business grew, the company remained loyal to its roots. Oils are still blended in the town for all types of vehicle and industries. Morgan has also kept a sense of its history over the years. Building just 850 cars per year, each is put together by craftsmen using a combination of ash, aluminium and leather. These builders
perfect their skills over a lifetime, bringing together heritage, innovation and cuttingedge technology from the world today.

Look to the future

Both companies are facing challenges as the industry moves so quickly. For Morris, the increasing demand for economical and efficient engines in vehicles means more pressure on the lubricant system. The addition of a turbocharger and a reduction in the size of the sump means oil has to do more work with less fluid. This brings unique challenges; developing products that can lubricate efficiently while working at higher temperatures, with thinner viscosities demanded by carmakers.

Historically, companies supplying aftermarket oils only had a small number of viscosities to work with, the most popular being 10W40. Today, however, vehicle manufacturers have their own specific requirements to match their finely tuned engines. From producing only two or three different blends, Morris Lubricants now develops multiple products for the many cars on the road today, alongside its range of classic oils, suitable for everything from vintage roadsters to Merlin aircraft engines. 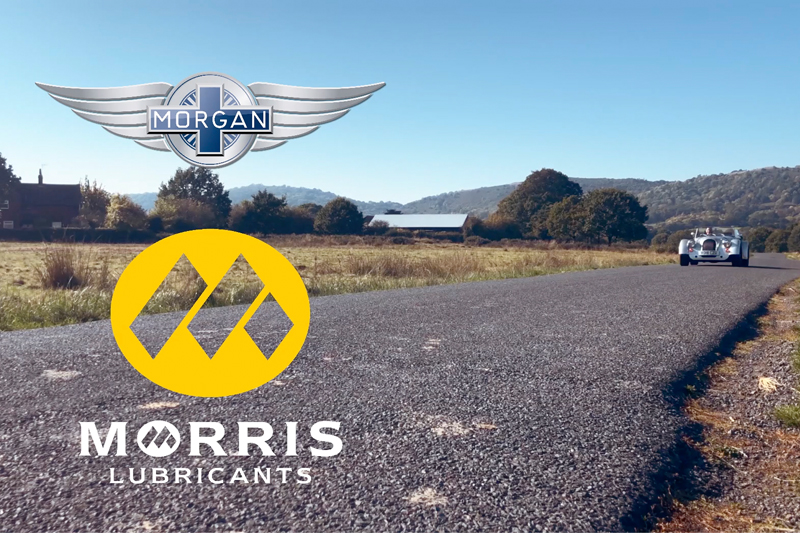 Morgan is also facing challenges, such as needing to adapt to the demand of modern motoring. Its current range, including the 4/4, the Plus 4, the Roadster and the Plus 8, was added to in 2011 by an updated version of the classic 3-Wheeler. In 2016, the company developed its first ever electric vehicle, the EV3, taking its historic three-wheel design and adding electric motors to make it fully zero-emission.

Morgan also needs to ensure that the engines in its Classic range run as smoothly and efficiently as possible. Therefore, the company has collaborated with Morris Lubricants to source an engine oil that will protect its classic range of Plus 4, Roadster and 4/4 marques, keeping them running smoothly, with the latest developments in lubrication benefitting Morgan owners around the world.

To help promote this product release, Morris has called on its Racing brand ambassador Rebecca Jackson. The company has recorded a video demonstrating the elegance of Morgan’s vehicles and the benefits of using the specially formulated product that Morris has blended for its vehicles.

As Brexit brings continuing uncertainty over future relations with Europe, the story of two British brands with heritage and innovative ideas for future challenges shows that the UK’s industrial and engineering prowess will endure throughout.