There are two things that appear to be an absolute guarantee come the winter: the cold will bite, and Sealey will release its Winter Promotion. With the former out of our remit, we take a look at the latter, and how factors can benefit from its arrival on the scene.

Sealey’s Winter Promotion launched on 1st September. Valid up until the end of February 2021, the company’s latest catalogue consists of 64 pages, which are packed with over 550 products, as well as discounts of up to 55% off list price, and free items.

Featuring over 25 new products, the promotion includes a range of Roadstart Compact Jump Starters, which are suitable for starting vehicles with 8-cylinder petrol engines up to 5L, and 6-cylinder diesel engines up to 3.5L. The front panel includes an integral LED work light, single 5V 2.4A USB output, and inbuilt MOSFET circuit protection. The units feature reverse polarity and short circuit protection with audible warning, as well as a mains charger with automatic power cut-off to prevent battery damage whilst charging.

Sealey now stock two familiar styles of hi-vis jackets in yellow and orange: jackets with a quilted lining and elasticated waists, and the Motorway style jackets. Both types feature a full quilted lining for greater warmth and comfort, and are fitted with a retractable hood, two outer pockets, an inner phone pocket, and zipper and snap closings for added protection against rain. 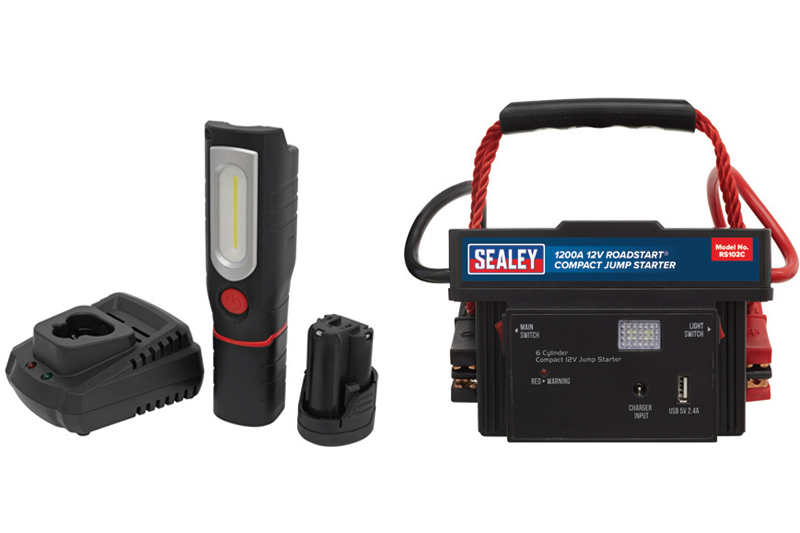 On top of this, the company is now offering a battery and charger combination. The deal consists of a 12V Li-ion COB LED 360° Inspection Lamp (body only), a 12V power tool battery which fits the rest of the SV12 Series, and a battery charger. The inspection lamp has a 360° swivel and tilt function, which enables the light source to be positioned in any direction. Each lamp houses a super bright COB LED, providing up to 1000 lumens output with 120° spread of light, illuminating the whole work area with CRI 80+, with brightness of 6500K. The lamp features a swivel hook and a strong magnet on the base, which allow hands-free operation.

Finally, Sealey is also offering an ‘intrinsically safe’ head torch and flashlight, which are designed for use in hazardous environments. They are both CE, RoHS and REACH approved, and are lightweight, with a tough and durable casing that can sustain high impacts and drops. Both are battery operated, have three modes, and the single high power XPE CREE LED produces bright, white light, with a notable working range.