Lucas Oil’s Dan Morgan highlights new revenue opportunities from E10 petrol, as he believes many motor factors have yet to join the party!

A 400% rise in sales of Lucas Oil’s Safeguard Ethanol Fuel Conditioner with Stabilizers in the run up to the switchover of ‘greener’ petrol shows a positive response to the government’s campaign, but feedback suggests many sales opportunities are being missed, according to Dan:

“Right now, the FAQs we are getting from motor factors – and their workshop customers – are can additives help, can I make any money from them, and have you got something that works? The answer for everyone to all those questions is ‘yes’.”

E10 standard petrol has double the capacity of E05

Lucas Oil developed its quick-fix ethanol solution because American consumers faced similar concerns during their own switchover almost seven years ago. The product works for ethanol fuel levels of up to E85 and is already providing protection from several threats to individual components, as well as the engine block.

Put simply, according to the manufacturer, the solvent properties of ethanol attack certain types of rubber seals, hoses and diaphragms, particularly in older vehicles; therefore, motorists need to appreciate E10 is a higher concentration level than E05 and that although most components in cars built after 2011 were designed with the higher level of ethanol in mind, these cars can’t prevent gum and carbon deposits building up more quickly on fuel injectors and other components. More importantly, they can’t prevent the build-up of water in the fuel tank.

The hygroscopic nature of ethanol means that it readily absorbs water from the air.

When enough water contaminates the petrol, phase separation occurs. This produces two distinct layers of fluid in the tank. On top is petrol, while underneath is an ethanol/water mix that eventually compromises engine performance. It’s this layer that promotes metal corrosion and other internal problems. E10 standard petrol has double the capacity of E05.

Dan added: “We’ve been telling motor factors that selling our additive to workshop customers is a new revenue opportunity. It protects their customers’ cars against E10 problems in the future, and that it can also work out cheaper to do this than to remain on E05 fuels, which is currently being sold at premium rates.”

Perhaps the fuel crisis has demonstrated that E05 might not always be available when the tank is running low. With a bottle of Safeguard Conditioner in the glove compartment, Lucas Oil believes the car can always be protected.

New markets for the additive are emerging

“There’s a good chance that the motorist with a car owns petroldriven garden equipment and/or a boat or another type of leisure craft,” Dan said. “These investments require protection from ethanol, too.” 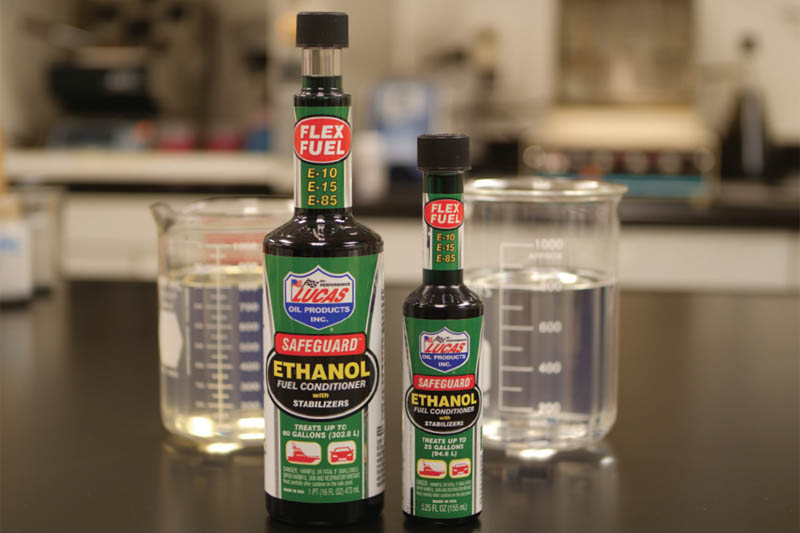 For anyone with a car that’s usually ‘laid-up’ over winter, there are additional problems to consider.

It wasn’t that long ago that people were removing fuel from the tank before a lay-up; however, modern fuel system designs make this less practical, which means there will be fuel with an increased amount of ethanol lying stagnant inside the system until the spring – contaminating unprotected fuel pipes, seals and diaphragms.

Moreover, the octane levels in the new E10 fuels fall more rapidly than those of E05. The smell of stale fuel is not the only problem, according to the manufacturer, as there may be ignition issues to deal with at the restart.

Lucas Oil’s Fuel Stabilizer is designed to address this; it protects against fuel degradation and ensures a healthy restart. Helpfully, it’s also appropriate for the fuel tanks of petrol-driven garden equipment, boats and other leisure craft.

Dan concluded: “One of the things we’ve been telling retailers is that that our experience in the US shows that the notion of using additives to solve problems is very attractive to motorists who are reluctant to pay for preventive vehicle maintenance. Our additives range is one of the most extensive on the market. In many cases, all the customers need is information, guidance and an opportunity to buy.”

0 0 0 0
Previous : VLS analyses the use of hydrogen to power vehicles
Next : LIQUI MOLY launches motor oil