KYB Advanced Manufacturing Spain (KAMS) is at the forefront of specialist high technology shock absorber manufacturing, and was built specifically for that purpose.

Based in Los Arcos, near Pamplona, and with investment of over €20m, KAMS was approved in June 2008, and the first production line testing began in August 2009. Full production commenced four months later, with the first OE project between KYB and BMW — the supply of front and rear shock absorbers for the new 5 Series. A few months later, supply for PSA and Audi was transferred from KYB’s other Spanish factory, KYBSE.

When you enter the production area at KAMS, the first thing you notice is how clean it is in comparison with a regular manufacturing area. The team works hard to maintain optimum conditions for this level of specialist manufacturing, including continuous audits over the processes and the products, plus high level cleaning audits every two weeks.

The manufacturing process is highly automated – operators start the process by adding the raw components, and they are not touched again until they are manually removed from the end of the production line. The quality check of the final product is a fully manual process.

The two main types of shock absorber manufactured by KAMS are the REAS and the IDC.

There are two configurations for this system: Parallel Connection, where the left and right shock absorbers of one axle (front and/or rear) are connected through a central valve; and Diagonal Connection, where the right front shock is connected through a central valve unit with the left rear shock, as well as the left front shock with the right rear shock through the second central unit.

The system controls the behaviour of the car during braking, cornering and acceleration to manage weight transfer and minimise body roll. It improves contact between the tyres and the road through balanced tyre forces, as well as improving tyre wear and handling, and providing better driving safety in critical situations.

It is used on Audi RS 6 Avant, Audi RS 5 Coupé and Sportback, and Audi RS 4 Avant vehicles under the name DRC – Dynamic Ride Control. Each set of REAS shock absorbers is connected to the central valve unit, ensuring optimum operation and precision for these high performance vehicles.

KYB’s Intelligent Damping Control (IDC) suspension system is the latest innovative technology developed by KYB and is used on a selection of prestige vehicles. In Europe, it is used by PSA on the Peugeot 508 and on the DS7 under the name DS Active Scan Suspension. It will also feature on the new DS9. In Japan, it is available on the Lexus LS and LC, and Toyota Crown and Avalon. 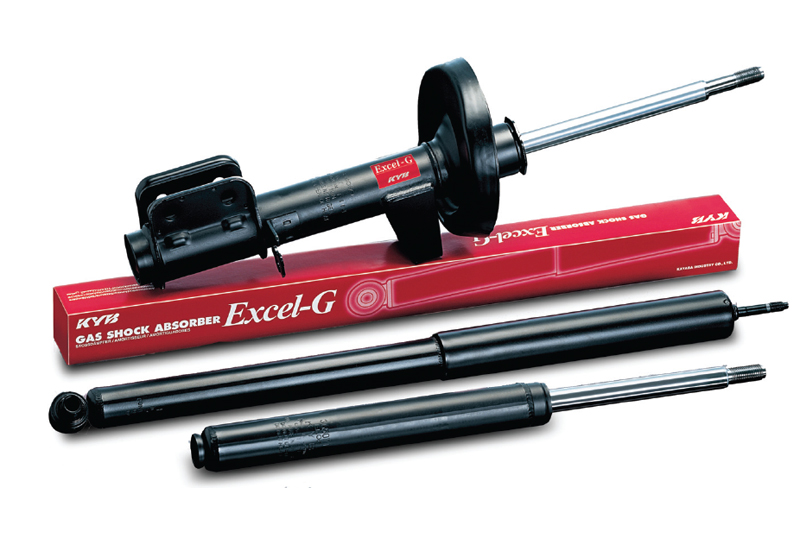 This smart technology analyses the road profile and sends it to the IDC electronic central unit. It works with four height sensors and three accelerometers to measure the vehicle’s reactions, including speed, braking and steering angle, among others.

The control unit continuously calculates the optimum shock absorber settings to mitigate any irregularity, improving comfort to create a unique and smooth driving experience. It does this via a proportional solenoid valve on each damper, which adjusts the inner pressure between the upper and lower chambers, giving individual control of both the compression and rebound on all four wheels.

Testing shows that the benefits are especially noticeable in the rear seats, with the scanning system reducing the oscillation which can occur over bumps. This may sound like mere improvements in driving comfort, but it will also have a positive effect on safety. Smoother driving means all four wheels will maintain a better contact with the road, allowing for safer steering and braking. A smoother ride will also reduce driver fatigue.

KYB has three shock absorber factories in Europe; two in Spain and one in Czech Republic, where it also has one purpose-built coil spring factory.

The KAMS factory currently supplies 15% of the top 200 shock absorber part numbers sold to the UK aftermarket, covering Audi, BMW, Ford, Peugeot, Skoda, Vauxhall and VW applications. As with production in all other KYB factories, distributors can be assured of world class product quality, with aftermarket shock absorbers manufactured in the same factories as OE.