PMF visits Motor Parts Direct’s head office to sit down with Chairman, Mukesh Shah, and Marketing Manager, Kevin Blazey, to talk about how far the company has come since its humble beginnings in 2000.

Q. Could you provide a little bit of background to Motor Parts Direct? How did it come into being?

Mukesh Shah (MS): Originally, I started the business in my living room in Cheshunt. We formulated early plans for the business and started to meet with suppliers. Motor Parts Direct started in November 2000, when we opened our first branch in Kettering. Soon after, we moved to Braintree in Essex, where our head office is now based. We expanded over a period of time, and now we have 120 branches in the UK.

Q. How did you go from working out of your living room to having 20 branches in 19 years?

MS: After we spread the business through Essex (around 11 branches), we bought a company called Cafco, which was a well established business with over 20 branches, so overnight, we went from 11 to 31! Then came ALS and Kevin Cooper, which took us to about 65 branches. The next acquisition was Central Auto Supplies, which was essentially bankrupt. It didn’t have the money to pay its staff the day we took over. It had closed 18 branches, all of which were making losses, so we really had to work hard to turn it round; it probably took us five years in total. Lastly, we took over a company Parkinson’s, which was more of an auto electrical business, based in Lincolnshire. It had a diesel business, which we have now converted to CP Diesel, a state-of-the-art workshop which reconditions diesel pumps and injectors.

Now, we have begun opening new branches on Greenfield sites. In the last 12 months, we have built on 20 sites, with plans to open another 15 soon. All this expansion now makes us the largest independent motor factor in the UK, with 1,400 staff and 700 vans. Last week, we were in the Sunday Times’ list of top 100 private British companies with the fastest growing profits in 2019… we’re 33rd! We got here through building a strong foundation, having a good team at office level and ‘on the ground’; the loyal staff are the ones making the company go places.

Q. How important is it to you that Motor Parts Direct still identifies as a family business?

MS: It is very, very important to us. We are hands on and all our staff have access to all of us, which is an important combination in a family business. For example, the drivers can come and speak to me directly, or anybody else in the management team. It works, so we have always left it that way. Kevin Blazey (KB): To give you an example of how hands on we are, after Mukesh has looked for – and found – a site for a new branch, we all go down and put up shelving, put stock away and talk to the branch’s new staff. Mukesh is also always visiting different branches. Another benefit of being a small management team is how quickly we can all get round a table and make decisions because it’s a family business. We don’t have to go through board meetings, which means that after deciding to open a branch, we can have it up and running in two to three weeks, which we think is phenomenal. 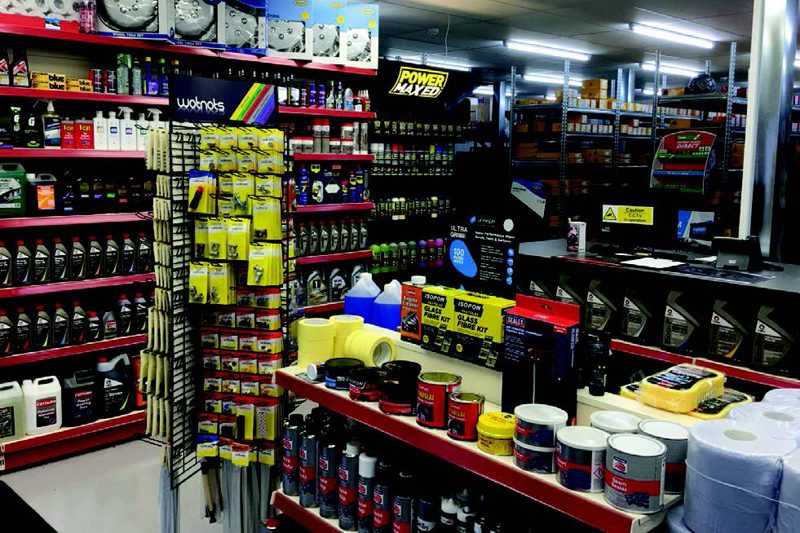 Q. What is the split between trade and retail business?

KB: The vast majority is trade; we do very little on retail. Having said that, most of the branches do have a small retail counter, but it is minute. The website comes in here too, but it’s more for product information than anything else.

MS: The retail business is declining, mainly because a retail customer can’t service or repair a modern vehicle due to their complexity. Also, the volume that can be made on selling polishes and sponges is not that huge. So, generally, we focus on trade.

Q. Are there any other issues facing the aftermarket?

MS: There are many. Electric vehicle technology is changing so quickly, which means that our trade customers need to seriously invest in the relevant training and the correct equipment soon, in order to be able to repair these vehicles. Not having enough garages willing to invest in this technology will of course eventually affect our ability to sell to them. Another of the larger challenges comes from the main dealers, which are not revealing all information to the aftermarket, preventing many garages from working on those vehicles. Also, dealers are tying customers down, which slows the business coming into the aftermarket.

Q. What are you doing to ready yourself for changing vehicle technology?

MS: In terms of hybrid vehicles, we are already starting to look closely at the components that we can supply to the garages, and stock them too. Hybrids still contain many of the traditional vehicle components. The bigger challenge is electric vehicles, which don’t have oil and engine parts, so we’ll need to focus on braking, steering and suspension components, as well as sensors, which is a product group that will definitely grow alongside electric technology. All the while, if we can keep an emphasis on diagnostic products – this will help when parts become more ‘plug in’. In times to come, I hope we see a new generation of technicians who will be better equipped to service these vehicles, mainly because they are more conversed with computers and technology. It is likely that these young people will be trained in main dealers, but eventually will have the aspiration to start their own workshops. But, for current technicians, we hope many will go for training. If we can take away the ‘fear factor’ of EVs that our customers have, that’ll help us in the long run.

KB: Well, we’ve actually already started planning! At the start of 2020, we want to give away three cars to customers – which I don’t think anybody has done before! Between now and then we are giving away t-shirts, mugs and pens, just to let people know we will be celebrating 20 years in the industry. Plus, we are holding a conference in June, to which we will invite all our branch managers and sales staff. We have 48 suppliers coming, which is a great time for us to thank them. It’ll be like a trade show, but just for us! We’ll give away awards to our staff and suppliers.