Heating, ventilation and air conditioning (HVAC) components have to work under intense conditions, such as hot temperatures during Summer, but those same components are susceptible to failure when simple maintenance and servicing are neglected.

Quality parts make a genuine difference, and Denso Aftermarket claims that motor factors can be assured of that when distributing its thermal products, all of which comply to the company’s strict Design Standards, and are said to result in an extremely low failure rate.

The ‘Death Valley’ test is an excellent example of how Denso Aftermarket’s original equipment (OE) department carries out its stringent testing when developing thermal parts.

Its engineering facility, for instance, houses two chassis dynamometers (rolling roads), which are used to simulate driving in a controlled environment. The climate can be adjusted from -18 to 40°C, relative humidity can be increased by up to 55%, the gradient of the road can be changed, and the speed and weight of the car can be increased.

A series of ‘worst case’ scenarios are devised and tested, to ensure that the vehicle’s parts can withstand even the most stressful situations, such as a holiday in Death Valley, the hottest place on Earth. The test simulates a 10-mile uphill drive, towing a trailer, in 40°C. If the parts can handle that, maybe they can handle anything!

Denso Aftermarket therefore sees no surprise in the notion that its thermal products are trusted by vehicle manufacturers worldwide, evidenced by the fact the company boasts a 40% share in the OE A/C compressor market.

The OE parts eventually become part of the company’s aftermarket range; if motor factors stock one of its parts, they’ll be choosing a component that has benefitted from the same expertise, the same knowledge from research and development, and the same testing as the originals. 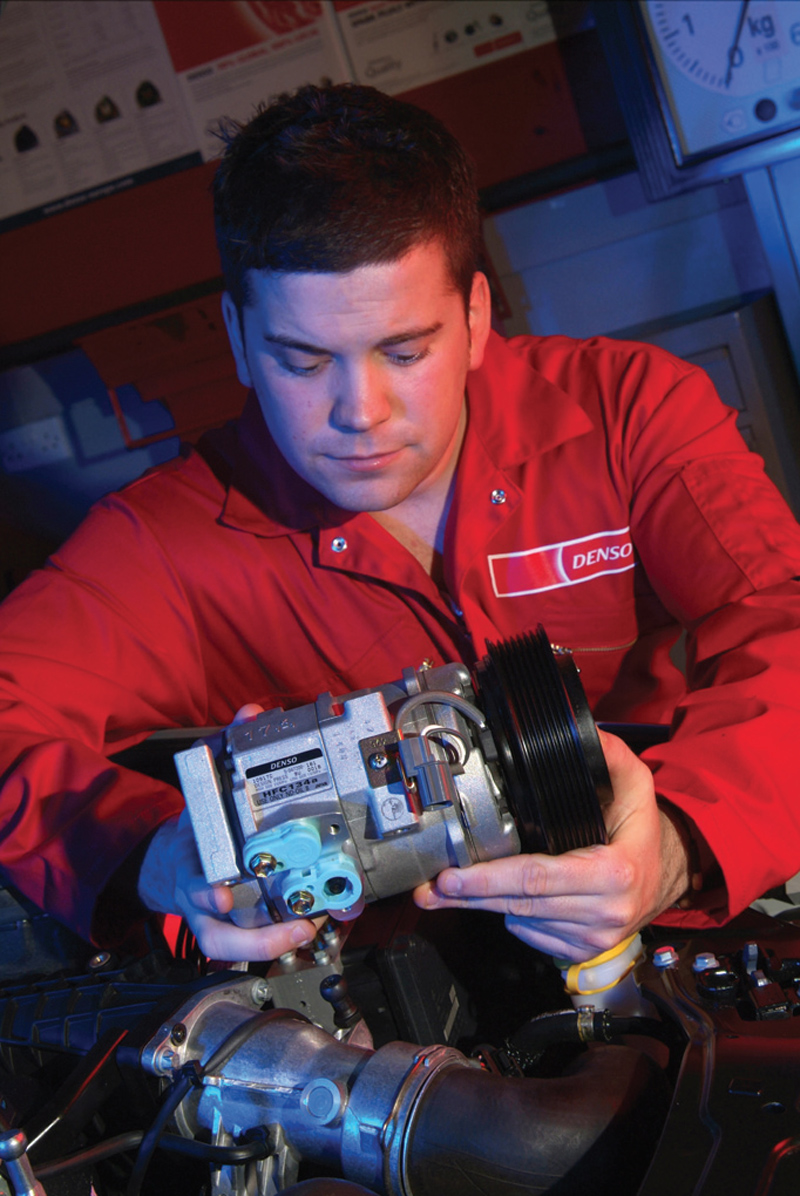 The A/C compressor under a microscope

The compressor is one of the most important components within the A/C system because, in essence, it drives the refrigeration cycle. Simply put, it draws the low-temperature, low-pressure gas refrigerant, which has been vaporised in the evaporator through the extraction of heat from the vehicle’s interior, compresses it and sends the then high-pressure, high-temperature refrigerant into the condenser, where it changes from vapour to liquid.

Although they all fulfil the same function, there are several types of compressors – reciprocating (piston) and rotary – and how they are fitted is broadly dependent on the age and the development of the A/C system in the vehicle.

The fixed displacement compressor, the oldest design, features a set swash plate that operates the pistons necessary to generate the throughput of gas, at a constant volume per rotation. It therefore has to use a clutch pulley to allow it to, in effect, be switched on or off when the A/C is or isn’t required. Of a similar era is the through-vane compressor that also operates on a fixed output per rotation basis and also employs a clutch pulley.

In a more modern vehicle, it is likely that a variable displacement compressor will be fitted, and these utilise a swash plate that can change its angle and increase or decrease the movement of the pistons and the flow rate. As a result, they do not need a clutch pulley, but instead use a fixed, damper limiter pulley, with a built-in safety mechanism. This allows its internal parts to break, thus preventing the pulley from rotating the input shaft should the compressor seize due to, for example, poor maintenance.

In terms of electric vehicles, there is the e-compressor, which also utilises scroll technology. However, rather than being driven by an auxiliary belt, the e-compressor incorporates an electric motor that can be modulated on demand.