Unlike the true hybrid configurations that use the engine and/or electric motor to propel the vehicle, the 48V mild hybrid system is employed in a typical stop-start vehicle, with the integration of a 48V electric motor/generator assembly to supplement the engine, which improves acceleration and enhances fuel economy.

Electrifying vehicles with a voltage higher than 12V is not new; the automotive industry contemplated using a 42V system in the 1990s. This was later dismissed due to concerns about the cost, as well as practical matters such as switches and relays prematurely failing. However, due to environmental concerns, modern electronics make use of transistors, diodes and microswitches which are more robust, making this a more viable option.

So, why stop at 48V? Current regulations state that anything over 60V officially becomes ‘high voltage’. This adds extra cost due to the addition of expensive shielding, connectors and conduits like the orange ones commonly seen on many hybrid and electric vehicles. However, this doesn’t mean that the electrical architecture of the entire vehicle will move to 48V. The conventional 12V supply is still used to power many of the standard circuits such as lights, door locks, electric windows and the infotainment system.

The common 48V mild hybrid consists of only a small number of additional components; an electric motor/generator assembly, an AC/DC inverter, a DC/DC converter, a 48V battery, and an e-charger.

The water-cooled, belt-driven electric motor/generator replaces the regular alternator and functions to restart the engine after a stop-start event, while the conventional 12V starter motor is used for normal starting, via the ignition key.

The AC/DC inverter can either be integrated or non-integrated into the 48V electric motor/generator, and exists to perform two functions.

Firstly, it converts the direct current (DC) from the 48V battery to alternating current (AC), which then powers the electric motor/generator in motor mode.

The second function is to convert the AC generated by the electric motor/generator whilst in generator mode to DC, recharging the 12 and 48V batteries as a result.

As this vehicle encompasses both 12 and 48V systems, a DC/DC converter is installed to reduce the electrical voltage from 48 to 12V.

The Lithium-ion 48V battery is generally located in the rear of the vehicle, and just like the electric motor/generator, it can use the cooling system to dissipate heat.

The conventional turbocharger is superseded with an electrified version, and is better known as an e-charger. Instead of waiting for the exhaust gases to spin the impeller up to speed, an electric motor is used to drive the impeller, instantly providing the necessary boost without the familiar delay that is usually experienced with turbocharged engines. Alternatively, superchargers can also be electrified to provide results equivalent to an electric motor-driven turbocharger. 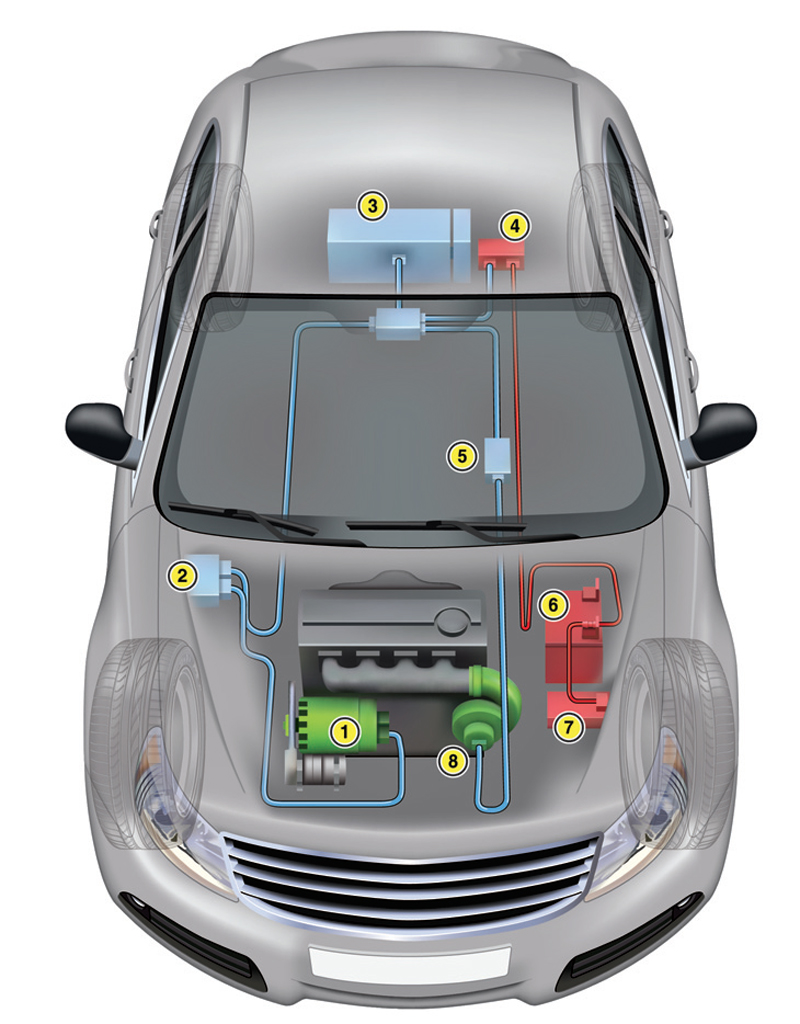 The 48V mild hybrid system is always evolving to fulfil exhaust emission regulations, improve fuel economy and increase acceleration. For this reason, VMs are already developing other enhancements to complement the 48V system, including the following:

The use of 48V technology is set to grow even further, especially as stricter CO₂ emission targets are being set and the decline of the internal combustion engine continues. With the growth in popularity and demand for HEVs and EVs, Autodata is rolling out drive system diagrams for electric and hybrid vehicles.