In a world where efficiency is everything, how much do belt kits have to adapt? Dayco explains how it has had to develop its own solutions.

Dayco is a supplier of a number of original equipment (OE) components, which it provides to vehicle manufacturers (VMs) across Europe and beyond. In lieu of the emissions targets that have been demanded by governments across the world, the company has been forced to develop efficient solutions for the needs of its customers.

Among these product developments is the High Tenacity (HT) or ‘white’ belt. With PTFE film on its inner teeth and its fiberglass core, it has become a popular timing belt for many engine variants, and is used for multiple applications by numerous VMs.

Just as the constant evolution of engine design has led to the development of new materials that are able to guarantee higher performance levels, further advances have raised the bar even higher.

Other notable solutions include the beltin- oil (BIO), a technology that Dayco originally developed to drive the high pressure fuel injection pump for Ford’s 1.8- litre ‘Lynx’ engine, but which has subsequently been used in several other applications.

Another development is Dayco’s beltstart generator (BSG) 48V, a stop-start hybrid engine system designed to enable torque to be transmitted in different directions. The BSG is an unorthodox alternator system that, as well as charging the battery when needed, provides engine starting and braking energy regeneration through the alternator, via the auxiliary belt.

The Dayco Poly-V belt for this system, which has a white, high-strength fabric coating for the rib side, is particularly durable, and is designed to operate in winter temperatures of -40°C, and then be subjected to up to 90°C within the engine department. 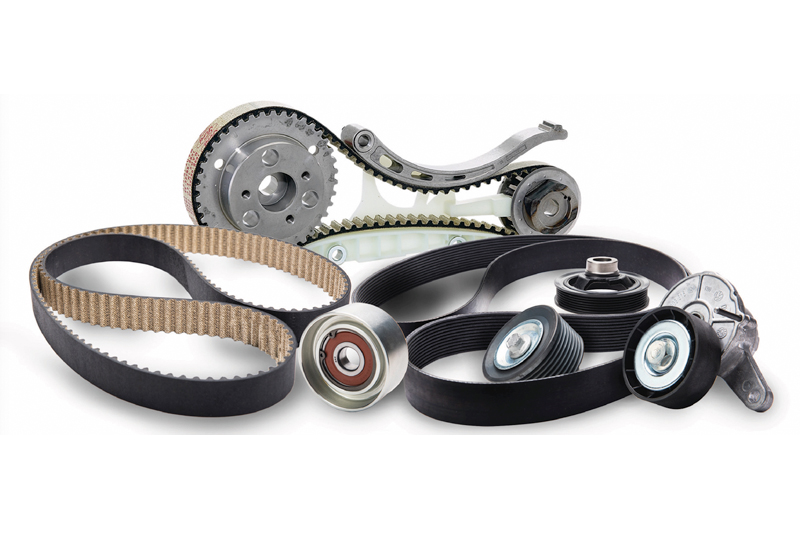 A myth that has gained momentum within the aftermarket is that numerous power transmission belt specifications, particularly for the auxiliary drive system, are generic rather than vehicle specific, which is at odds with normal practice for many other engine related products, and is completely alien to Dayco’s tailored engineering ethos.

One of the more obvious repercussions of this ‘one size fits all’ mentality has been the resulting problems that have arisen following the replacement of the OE auxiliary belt. Despite the practices of some aftermarket suppliers, the OE auxiliary belt is specifically designed to conform to very strict dimensions, and so, where replacement belts of a more generic – as opposed to a vehicle specific size – have been fitted, failures have occurred. It is, however, not just the size of the belt that matters, it’s the way that the belt is manufactured, and for some particular applications, the construction has been improved to include, for example, aramid fibres.

The combination of non-application specific sized belts and non-conforming construction is a recipe for disaster; with several Volvo applications in mind, the resulting belt failures have not only caused inconvenience and left motorists stranded, but there have been cases where the broken belt has also damaged auxiliary components, and even caused the drive system to seize, leaving a hefty bill at the door of the workshop.

Dayco claims that its policy is to only manufacture vehicle specific products, providing independents with an OE quality solution that is designed to the precise specification, in terms of both their dimensions and construction, to the OE article.

When it comes to the construction, the simulation is not just limited to the internal structure, but also the external properties. An example of this is the fabric on the back surface – defined by the code ‘DT’ – of the auxiliary belt, against which the friction wheel on the PRINCE BMW PSA engine that is used in models such as Mini, BMW 1-3 series, Citroen C3-C4, PSA 208-3008, runs.

By applying this strategy, motor factors and technicians can have complete confidence in the replacement solution, which affords the consumer complete peace of mind.